The Shark Is Broken 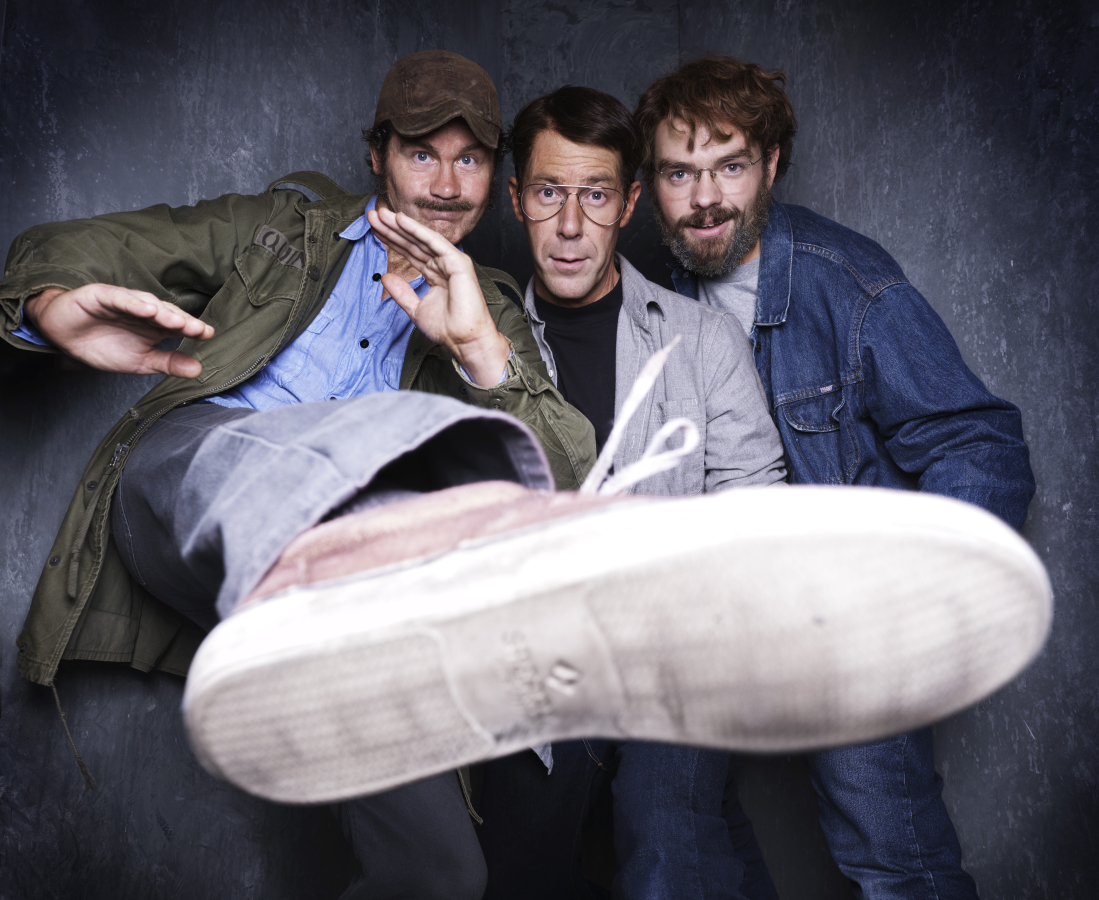 I saw a play when I was ten of a production of Pinocchio in my hometown. That… I got bit by the bug.

Well, I was in a small town in northern Canada, so it was the Community Theatre and the video rental shop where all the movies are. They were like little portraits in a gallery. And seeing all those covers of movies really hooked me into wanting to be an actor.

And what’s the best thing about your job?

To step out of your life and into someone else’s life for a while. And through that, improve your life and hopefully improve other people’s lives.

And what’s the best thing about theatre specifically?

Theatre, I… especially with everything going on with COVID, I realise now theatre creates communities. It’s not like communities creative theatre – I actually think theatre also creates community. ‘Cause that’s the feeling. You get an audience of people altogether.

And to talk a little bit about the pandemic. So, what was the journey like for you with theatres closing and theatres opening again?

I suddenly… we were just about to start rehearsing the shark is broken. That got cancelled. I suddenly had to become incredibly proficient at home studio recording for voice overs. There was a moment… there was a moment when it was, somewhere it was said… this is not theatre. Somewhere was said that filming working is essential work. It was given that sort of essential status, and it was bittersweet ’cause I thought yes, it’s so nice to hear that we are essential. It’s a shame they don’t say that for theatre. So, when we finally came back to theatre it was again like a feeling of going back to a kind of a… I hate to use the word again, but it’s a community. Going back to a kind of home community.

You know what? Zoom and social media, they’re all great. But, when you suddenly realise the depth and breadth of connection when you’re actually sitting next to somebody – even if you’re not even talking, if you’re watching the scene – is on levels that I still don’t think any of that technology will ever touch. That’s what I’ve felt. That’s the deepest thing I’ve felt going back to doing theatre again. It’s amazing having people sit all together and experience something again.

What’s the best thing about our life performance for you?

There will never ever, ever be a repeat of the moment that you’re about to do. And if that is not a message for being in the moment and enjoying life, I don’t know else live performance can do. That’s what I feel it is. We’re going to do our show a hundred and something times, but it’ll never be the same. And that’s what’s so exciting.

So I was about 10 years old, the school did a kids version of Macbeth and I played MacDuff and I just really liked the sword fighting ’cause The Lord of the Rings was my favourite film and I realised, oh, you can do a job.. that’s a job… that you can do?!

And then just kind of up from there and somehow made it here.

For you what was the journey from theatres closing theatres to theatres reopening again?

Oh God, so we were just about to start rehearsals for this show. I’d quit my pub job. I’d quit everything and then obviously the West End shut, so I had to kind of beg, borrow and steal to have my job back at the pub just to get the furlough money. So yeah, it’s been interesting. It’s not entirely been great, but being back now is just wonderful.

Fantastic, it’s like the world reopening again, having audiences back. I did a few shows in the summer and last year as well where it was half capacity. It was great to be back but being fully open again the theatre being packed, is such a wonderful feeling. It’s so great.

And so, tell me about the character?

I play Robert Shaw, who was Quint in Jaws. Quint is the fisherman who is hired to catch the shark. Who is almost a homicidal maniac. You know, because you later find out that he was aboard the USS Indianapolis, which was torpedoed by a Japanese submarine. They were on a mission to deliver the Hiroshima bomb, so no distress signal was sent and three quarters of you know, 1100 men were eaten by sharks. So, he has a vendetta with sharks.

Well I was probably… I think I made a vow to myself when I was eight years old. You know, I was just doing a school play, but I had a very inspiring teacher who always used to put on quite difficult plays. So, I was doing a play for him and thought that it was the most fun I’d ever had in my life, you know, dressing up and pretending to be somebody else really appealed to me. So, you know, I just… I’ve just stuck to that decision.

I think the best thing about our job is when you’re in a play that people actually enjoy, it’s very gratifying. You know, to be applauded for your work – it’s just simple as that in a way.

Well, in a way we were very lucky. I feel an enormous amount of sympathy for those people who were in shows that when COVID hit were effectively closed. There are quite a few sad stories of projects that that might have really done very well, but were aborted because of COVID.

We were just about to get ready to rehearse in May 2020 so it was frustrating, obviously, but it was frustrating for absolutely everybody, so I feel relatively lucky because Sonia Friedman, who’s our producer, kept the faith and we feel tremendously lucky to be in the position we’re in now.

Well, it’s exhilarating. I feel like I’m on cloud nine. It’s a very exciting time, long may it continue.

London feels wonderful with people walking around. Obviously we’re still very cautious, we’re taking all the precautions, we get tested every day and we, wear masks wherever possible. But at the moment – touch wood –  it’s a good time to be alive.

Is it a connection with the audience? Riding a laugh.

You get a lot of energy from the from the audience, especially in a comedy. So yes, it’s it’s the fact I mean, it’s scary ’cause things can go wrong but it’s very energising because of the Audience if if the show’s any good.

Book The Shark Is Broken tickets