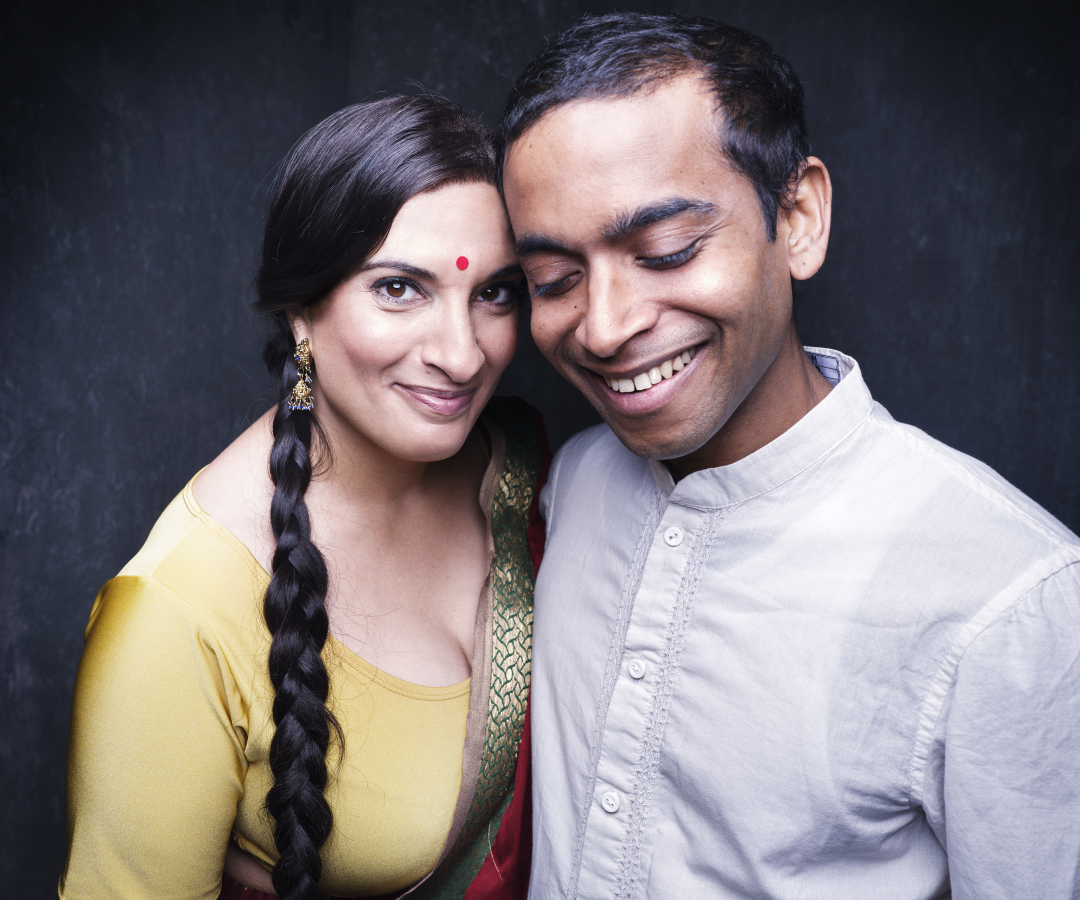 The journey has been, it’s been lovely. It’s been a weird two years, so I’m quite confused on the way I’m supposed to feel about things starting up again, but I think I’ve learned how not to care too much about everything.

Coming back into it, I guess I’ve grown. I think a lot of people have had to grow up really quickly during this time. So, coming back is a strange one.

We’re going to start in two weeks’ time. We’ve been rehearsing, but we did this show in Sheffield Crucible, and it was great. We were supposed to open [in the West End] last year. Obviously, we couldn’t, and coming back to it… loads [has] happened!

I had to go back home to Sri Lanka. I was building a lot of things. I built a theatre and a house for my mom, I was able to like, employ a lot of people, pay people properly. So it was a different life that I lead!

In the first lockdown I was in the countryside. I was a sheepherder and a repairman, a hedger, I became an irrigation guy. And suddenly I’m back here and apparently, we’re opening a show in the West End!

So what I feel now is that I’m on this journey and it’s just a part of it. This journey actually started all the way back in 2008, when I first came to England. It’s like a wave of fortune or luck or good relations that have carried me over here and I have no idea where it’s leading, but at the moment I’m having a great time.

Do you feel like you almost appreciated the time that you’ve had off?

Oh yeah, oh yeah. Much needed time off as well. It was a great time. [For] the first bit of the lockdown, I was in love with I met somebody in Paris who would come to London, and we ended up going to her friend’s in in Dorset, in Sherbourne. Suddenly, I was this farmer and she was this farmer’s-wife-figure, baking, and we were laughing about what these roles that we were playing already!

Going back home this time and spending a lot of time with my parents, seeing them as people who are getting older and part of me and me as part of them. It was quite deep and profound. I’ve never spoken with my parents this way, because I have been away for so long, and whenever I go back it was always short periods of time. I’m the good son, who does all the right things and says all the right things. But this time, because I was there for a while, we got into conversations [about] things that we didn’t agree upon. Now and then there were arguments, but it’s brought us closer and showed me a different side of life. That’s why when I come back and this is all going on and we’re getting photographs taken of us… I don’t know what to make of it all!

How is it being back?

I’m enjoying it, I really am. When I say I don’t care about things too much now that doesn’t mean the enjoyment is gone, or I’ve become a cynic. Not at all. Wholeheartedly, I’m having a wonderful time in life. We’ve seen what the stakes are in real life, when thousands of people are dying every day, when countries are brought down to their knees. So, in normal life, I feel much more chilled, really. Rehearsals… play opening… I feel much more relaxed and I’m glad for it.

In complete vanity, the applause at the end! Being able to have that big stage and know that with a sigh I can control a few hundred people’s breath. Those moments. And of course, the community that comes with it; the families that we create like instantly. The lights. There are so many things in performance that I missed.

It’s been a long journey; we’ve been on a hiatus since 2019. We did this show at the Sheffield Crucible, and this is my second show from Sheffield that’s come to the West End – I was in the original Everyone’s Talking About Jamie. We were meant to come last year, and who knew that the world was going to change and that we were going to have to re-evaluate, reassess everything really! Our lives, our artistry. And now we’re here and it seems like quite a poignant play to be doing at this time.

How is it for you being back?

Brilliant. I’ve been fortunate enough to have been working on lots of projects. Lots of audio dramas and radio. And I’ve have directed three projects as well. I directed a Zoom film – filmed entirely on Zoom. Then I made a sitcom out of a stage play, which I filmed and was in. And I’ve just directed a play at Customers House, South Shields, about the Yemeni sailors and their wives and children. So, it’s been amazing.

Coming back, I think people have landed differently. I did quite a lot in the last two years of being of service, reaching out to students or people who looked in towards their mental health. I think we need to come together and be kind – you don’t know what everyone’s been through. I think we need to make sure that we go together as one.

Because I’m a singer as well, I really miss singing with a live band. I really miss just having that power of sound. I think it’s a collective thing, just laughing together, being able to  play around and being able to just talk. For a long time, we were very socially distanced, when actually what you’re longing for is connection.

You want to create stories so that we’re all connected. For some people it’s been, interesting to come back to being that tactile with other artists and actors. It becomes habit building after a year and a half. Because you just feel a bit fearful. We have to be careful, we’re tested all the time, we have great responsibility to each other to make sure that we are sensible. But at the same time not fill ourselves with anxiety about being back at work and creating something for people. So, there’s a dual responsibility. 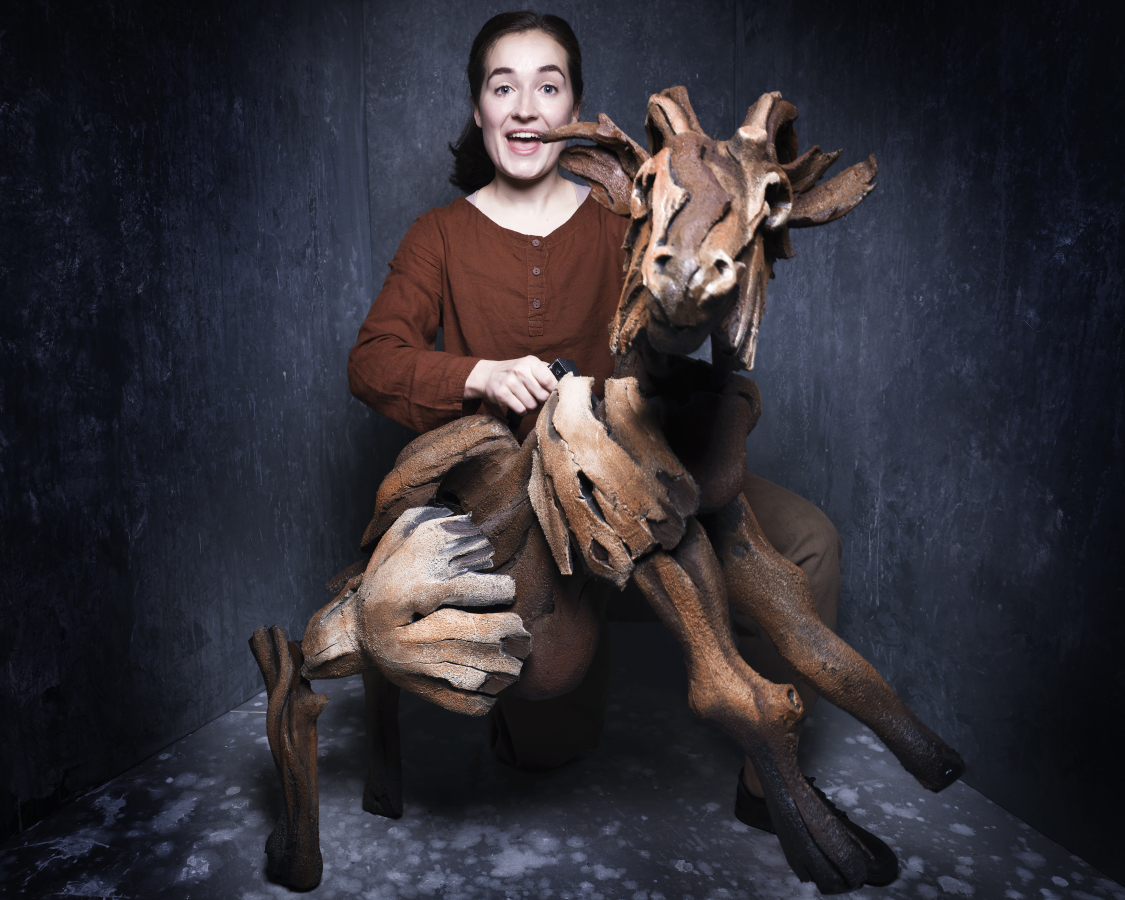 I’m currently in the Life of Pi, playing the Tiger’s heart. Which is a lovely way of putting it. But basically, it’s the front legs.

What has the journey been like to get back to theatres and everything, for you?

Well, it was a bizarre one. I was very lucky in that we got cast in the Life of Pi quite early on, about two years ago in October, which was quite early to find out about a job because we weren’t meant to start till 2019, or 2020? I can’t remember. It’s a blur! So I always knew I had this job and the producers were really great all the way through the pandemic, saying it’s happening, it’s secure.

I felt quite lucky that I knew that at some point it was going to come back and [I was] really grateful for that. But it was bizarre, it felt really surreal – is it ever going to happen? [It was] just such a long time to wait.

I was doing a show in America; we were touring around the US with big puppet dinosaurs. I remember reading an article in early February about it and thinking, ‘wow, that sounds nuts’ and then Broadway shut down and we flew home and it went straight into [everything]. So it’s [been] a bit crazy.

How are you finding it being back now?

Amazing, so wonderful and so emotional every day. [It] is so cool that we get to do this. You can feel from everyone there in the room that everyone is in love, so happy to be there and so grateful to be working. I feel like that was the case in a lot of shows that you work on anyway. I think that in this industry, you don’t do it unless you really love it and you really want to be there. But it definitely feels like that’s gone up by a hundred percent, because everyone’s just so grateful and happy to be back.

What did you miss moments about live performance?

The imagination; creating magic. Especially with puppets, because you are really bringing just an object to life -having that imagination. We watched a lot of movies and series [in lockdown] but it’s not the same, because [theatre’s] there in front of you.